During their meeting on June 20th, the two Ministers discussed various topics of common interest. The two Ministers reaffirmed their commitment to further strengthen bilateral and international cooperation by universal values such as freedom, democracy, human rights, and good governance. During his stay, the Minister of Foreign Affairs and Cooperation of Benin, not only met with Japanese high-level Authorities but also engaged with actors from organizations like JICA, JETRO, JBIC, and some private companies. We hope that this not only symbolizes the beginning of a renewed partnership between both nations but that more Japanese companies will come, explore and take advantage of Benin’s strategic location to access the West African and the African Market at large.

Benin’s strategic location in West Africa, its human capital, political stability, and heritage are significant assets to spur heightened economic growth and a better future for its entire people. It is with this objective in mind that the Head of State, H. E. Mr. Patrice TALON, launched in December 2016, the Government Action Program (PAG)2016 – 2021, “Revealing Benin” as a development and investment Program with unprecedented scale in the country’s history. The plan encompasses bold and innovative actions to sanitate every field of life in the country, including a fierce fight against corruption and deep institutional reforms.

As part of the implementation of the PAG, Benin counts on Japan, one of its most significant development partners. Since the establishment of the diplomatic relations between both countries in 1961, Japan and Benin have shared similar values in various areas such as democratization, respect for human rights, cultural heritage as well as regular exchange of contacts between the Officials of both countries.

The ECOWAS region to which Benin belongs is one of the most integrated areas on the African continent. Since its creation on May 28th,1975 in Lagos, Nigeria, the aim of ECOWAS has always been to promote the cooperation and development among member states in all economic activities area—by abolishing the trade restrictions, obstacles to the free movement of people, goods and services within the community and harmonizing the regional sectoral policies. ECOWAS’ mission, therefore, is to create a significant potential West African common market and a monetary union.

This mission is governed by Article 12 of the Lagos Treaty, which stipulates that “it shall progressively be established a customs union among the Member States which will be extended to the commodities exchange.” Benin’s membership in this sub-regional organization has allowed the country to progressively reduce and ultimately eliminate import duties by a program established by the Committee of Trade, Customs, Immigration, payments, and Monetary Affairs. Also, Benin increased the trade flows and intra-community trade, by recovering his shortfalls. In the same vein, customs barriers have been abolished to promote intra-community trade through a free trade zone and a common customs tariff.

In 2000, ECOWAS issued a Community passport, adopted by the Member States in their territory in 2005 and a traveler’s check which helped to mitigate the non-convertibility of currencies and to facilitate business operations and payments. These arrangements have allowed The Republic of Benin to recover its existing shortfall and improve his trade balance. Recently in October 2018, the Joint Border Post (JBP)of Sèmè-Kraké between the Federal Republic of Nigeria and Benin was built according to international standards to meet the expectations of the ECOWAS people. This JBP is located on the Abidjan-Lagos corridor, which represents about 70% of the sub-regions total transit trade and will serve a significant population in the two beneficiary countries.

Also, one of the ECOWAS innovations that empowered the Republic of Benin to increase its customs revenue is serving landlocked countries such as Burkina Faso, Niger as well as the introduction of the Brown ECOWAS Car Insurance card, to facilitate international motorists’ free movement in the Community which is coordinated in the Republic of Benin by the National Office of Benin.

The implementation of the PAG is benefiting from the support of various private sector partners and different actions taken to better public governance and strengthens accountability—ultimately making the business environment very attractive for national and foreign investors.

The two Ministers expressed their wish for further private investment in Benat and welcomed the Memorandum of Understanding (MoU), signed by the Government of Benin and a Japanese company on November 2, 2018. The project, a study for the construction of factories in the textile sector was announced on the occasion of the first edition of the Japan-Africa Public-Private Economic Forum held in Johannesburg(South Africa) last May.

Minister AGBENONCI expressed his gratitude to Japan for its contribution to Africa’s development and recalled that TICAD (Tokyo International Conference on African Development) is a recognized and respected partnership forum for its openness, inclusivity, and transparency. Benin has attended at a high level all the summits since the creation of the TICAD process in 1993 and would like to reinforce our cooperation through: 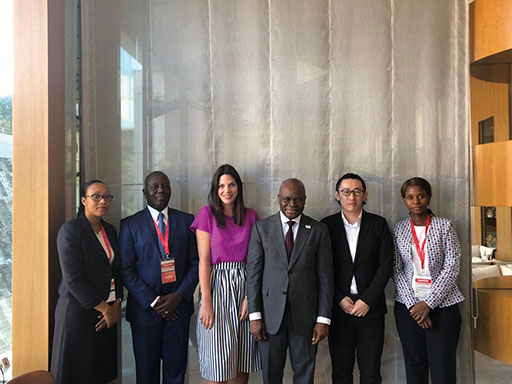